Meet Stella Stephney, skilled as a writer and vocalist, this Chicago-born 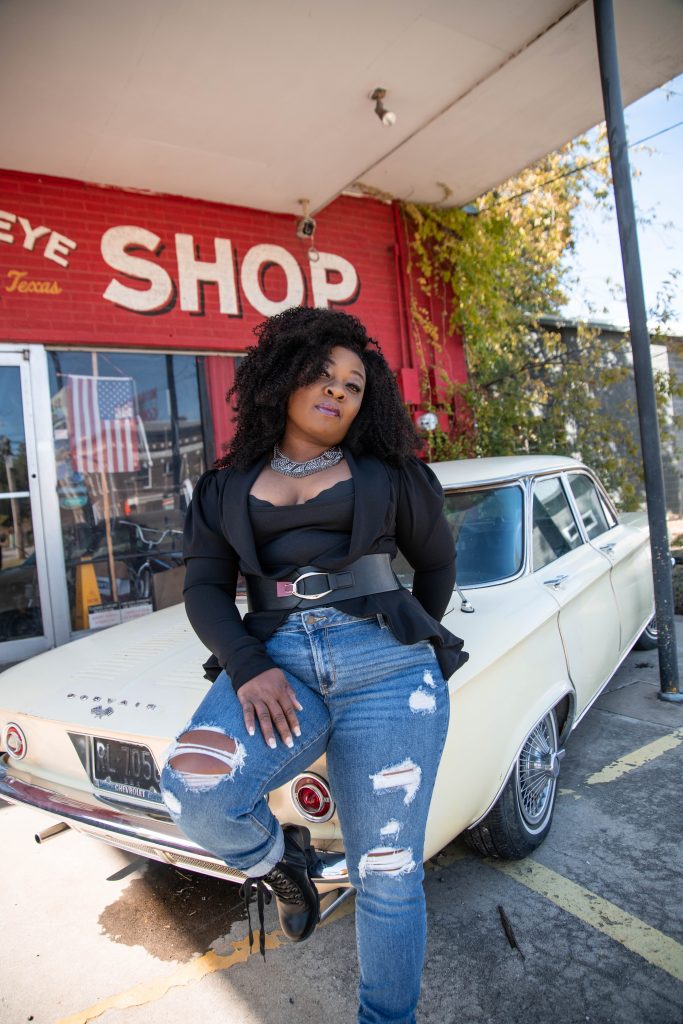 native is the youngest of 4 children and started singing at the tender age of 5. “I remember dressing up in my mother’s clothes, and with brush in hand, singing in front of the mirror for hours, that is until my mother found out. Then I just sang without her clothes”, says Stella. Stella grew up in a very musical household. Her brother was in a band and both of her parents have beautiful voices. Her cousin, Bill Stephney, was a founding member of The Bomb Squad which was the founders of the group Public Enemy. Bill also went on to become President of Def Jam Records. “There were times when I had to sing to eat. We’d have a family get together and everyone would start singing except for me. I was very shy when it came to singing in front of other people. My mom and dad always told everyone that I could sing so of course they wanted to hear for themselves. I would always try to get out of it so they made a rule that if I didn’t sing, I would not be able to eat. It worked on me the first couple of times, but after a while, my mom realized that I was uncomfortable so she didn’t make me do it anymore”, says Stella.

Throughout high school, Stella sang in talent shows and in the church choir, but it wasn’t until she met up with producer Toni Randall that Stella actually took her singing seriously. The first song Stella ever wrote and recorded was a house track, something she never thought she’d sing. “I’ve always liked house music, but I never thought I would actually do a house track. The song I wrote ‘Don’t Stop’ actually started out as a ballad, that is, until Toni heard it. He sped up the tempo and made it a house track”. Well, the song was a big hit in the clubs. She performed the song at Cairo’s up North and eventually in concert with Darryl Pandy, and it was very well received. Unfortunately things didn’t pan out between Toni and Stella, and that left Stella on a search for other producers who would listen to her and do the type of music she wanted to do.

That’s when she joined forces with Santee Shannon, Jr. (Tripple Plat Studios) and formed Sanest Records Limited. Together, they were able to link up with the platinum producing team of U Be U (headed by Gee Pierce) and engineer Bernard Terry (Silversun) out of Michigan (they worked with artists such as Davina, Top Authority, The Dayton Family, Ready For The World, Illstreet, Howard Hewitt, Vesta Williams and Melvin Riley just to name a few), and cut Stella’s first album entitled, “Stella Stephney – One Step At A Time”. Stella performed at various benefits to help raise money for AIDS and underprivileged children, she performed on ABC’s “Steppin’ At Club Seven”, The New Regal Theater, the Clique Nightclub and various other clubs throughout Chicago, Kankakee and Indianapolis with artists such as DJ Kool, Darryl Pandy, and Al Hudson just to name a few. During this time, Stella received rave reviews from the N’Digo and Chicago Defender, and received a Dymond Award for her accomplishments in the music industry.

Stella is currently in the studio with Norman “MouseQuake” Barrett of The QuakeSpot, Carlos Ellis of 3-21 Studios and Ty Macklin of Alpha Omega Recording Studios finishing up her ep “Throwback take 1”, which is slated to drop Q1 2020. The first single from the ep is a remake of the group Klymaxx’s song I Miss You. It dropped December 15, 2019 and is currently available on ALL DIGITAL PLATFORMS!  I’m sure you will agree from start to finish that Stella’s style, grace and sound is something special.